A Koan is a paradoxical anecdote or riddle used in Zen Buddhism to demonstrate the inadequacy of logical reasoning and facilitate awakening of consciousness.

In 1988 I began a Series of drawings called the Sidewalk Series. I was fascinated by the cracks and lines and curves in the sidewalks and roadways of the city. At the same time, I was exploring Thiebaud’s street scenes and Diebenkorn’s Ocean Park Series.  This was the foundation for the Koan Series that began formally in January 2000 as a collection of small, intimate drawings. It stayed that way for many years. There were a number of unsuccessful attempts to go larger, but it was not until recently that I gained comfort working on a larger scale.

The earlier drawings in the Series were meant to look unfinished or in process and though they look far more controlled when compared to current work, an intuitive sense has always been present. There are people who find liberation through order and there are others who find it in chaos. I am the former who thankfully has found a way to bridge both worlds. I build my works on paper in a deliberate way that satisfies my need for control while producing work that allows me to express myself. By working in layers, I essentially create and destroy, hide and reveal what I want to be seen or obscured. All the work begs the question, why did the artist do that or stop there? That is the riddle. That is the stimulus that (hopefully) encourages viewers to look at the work differently, in a broader, more open way, free of preconceptions.

Of the question words: (who, what, when, where, why and how), I find “why” to be the most confounding because all too often the answers are unsatisfying and lead to more questions. This aspect of “why” is an elementary principal inherent to the Koan Series and should never be too far from viewers minds when considering these works.

From its inception in 2000 I have seen the work in the Series evolve dramatically. What began with controlled line drawings eventually loosened up and became more expressive. Recently the Series has exploded into scribbles and mark making and symbol rendering amidst loose application of varying mediums. Psychological themes of archetypes and the collective unconscious, archeological, anthropological, astrological, alchemical and other influences along with Joseph Campbell, Eckhart Tolle and Rudolph Steiner’s thoughts on Intuition are asserting themselves and the artistic influences of the past are evolving as well. In the shadows, never far away, are Twombly, Tanguy, Turner, Pollock, Basquiat and others. With each piece that I produce I feel as though I am shedding the extraneous and revealing the essential in both myself as an artist and my work. My first large format pieces include an alphabet and a form of intuitive mathematics that I contrived. Also finding its way into the work is primitive symbology, mark making and hand prints. The primal and the modern are brought to the fundamental questions that all us humans seem to ask at some point, “Why am I here? What is my purpose”? It is all meant to set a stage. Each Koan presents elements that hint at a direction and it is up to the viewer to take it from there and create the adventure. That is what art (and life) should be about, facilitating an adventure, facilitating an awakening of consciousness. 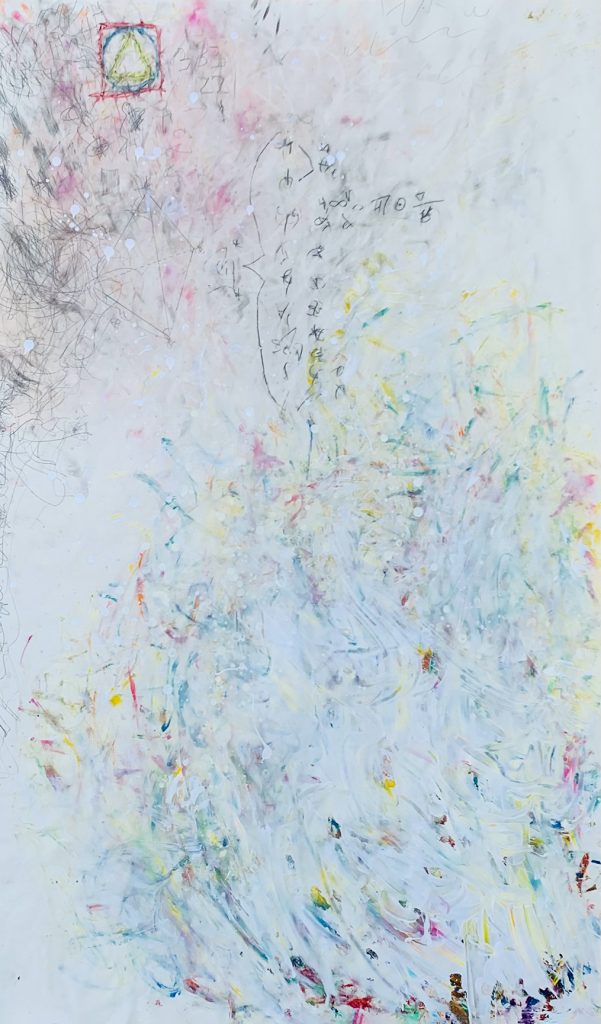 Koan 148 The Key to Unlocking the Id

Koan 148 is the cover image for my book I recently self published spanning the 22 years of the Koan Series works on paper from its inception in January 2000 to today.  You can see those 150 works by following this link:

Koan 149 The Dawn of Creativity

Koan 149 can be seen in my book by following this link: 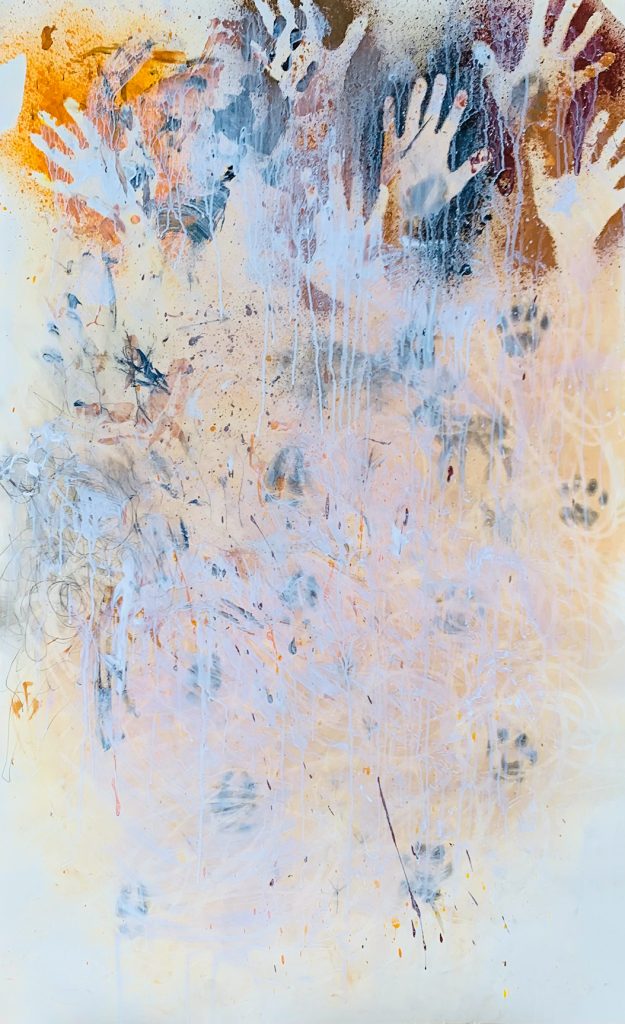 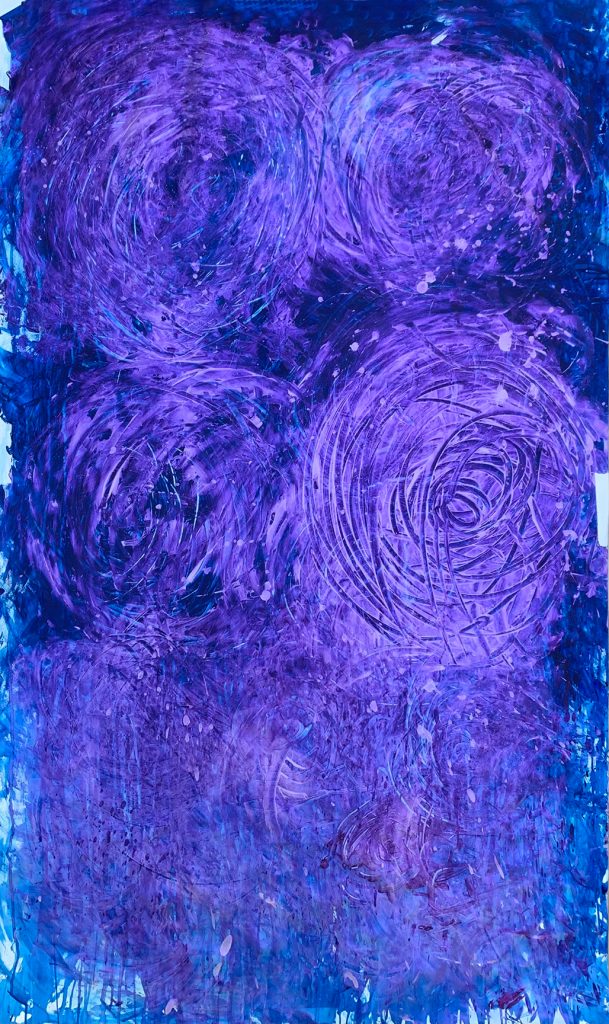 Koan 150 The Dissolution of Eternity

Koan 150 can be seen in my book by following this link:

Koan 151 The Secret is Not Knowing 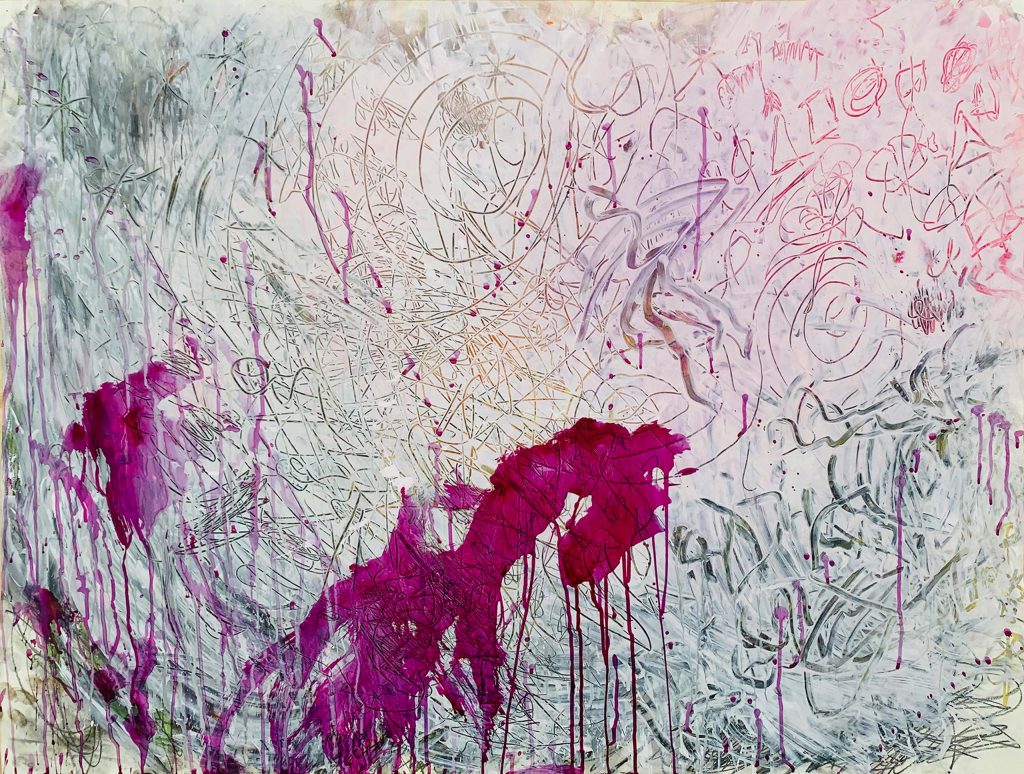 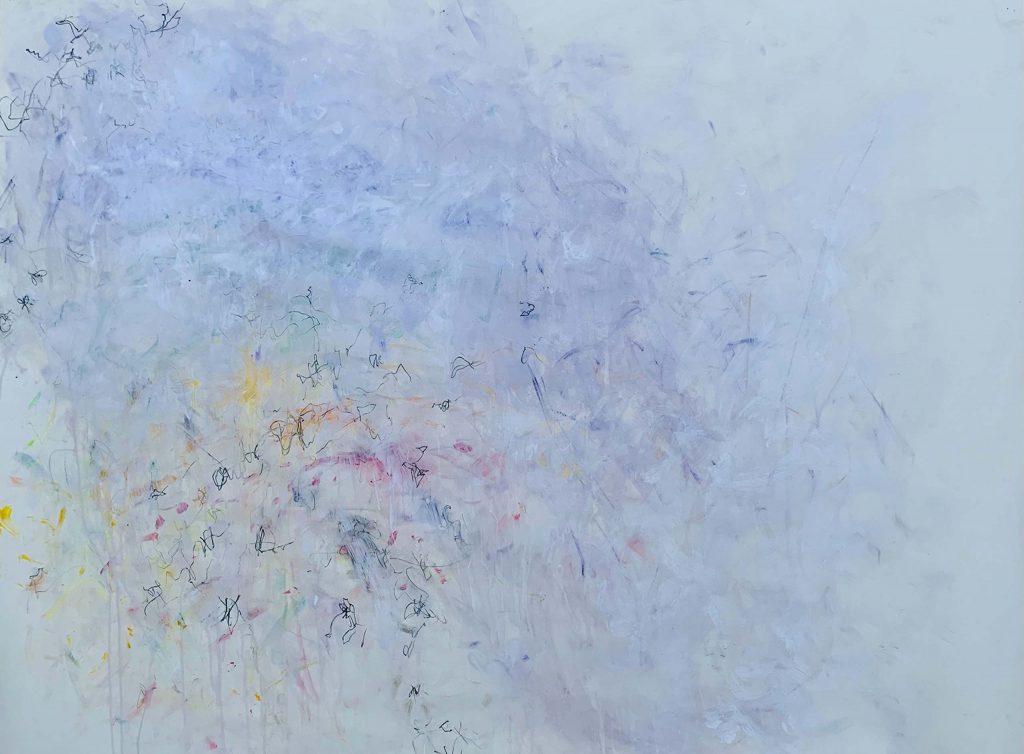 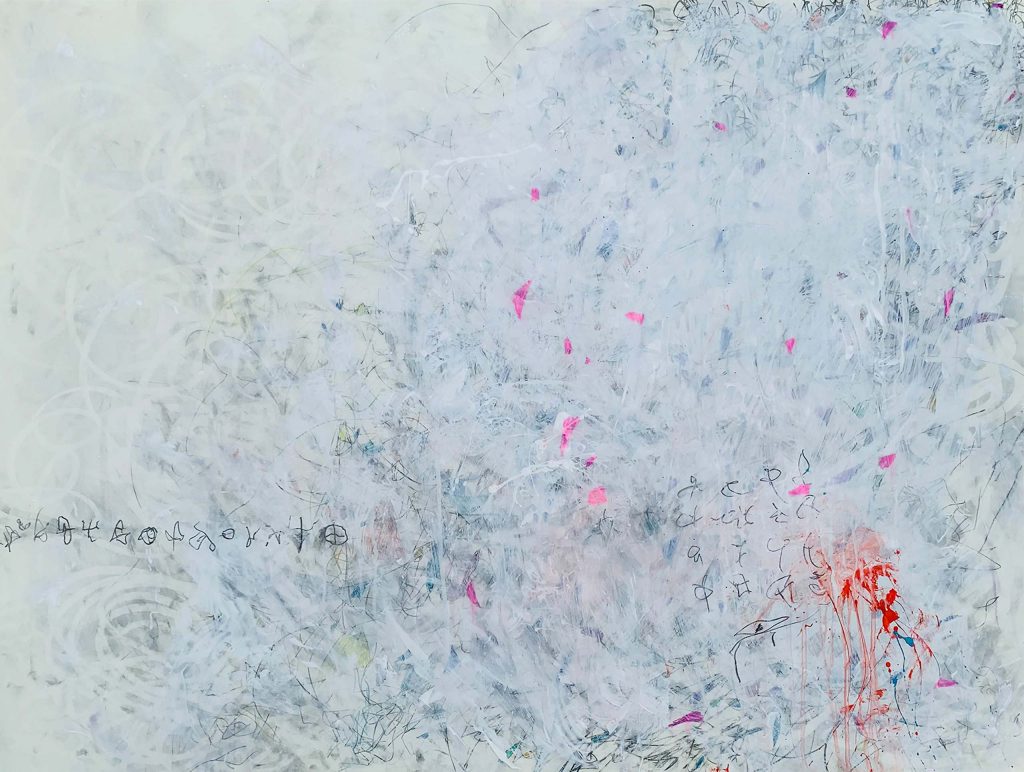 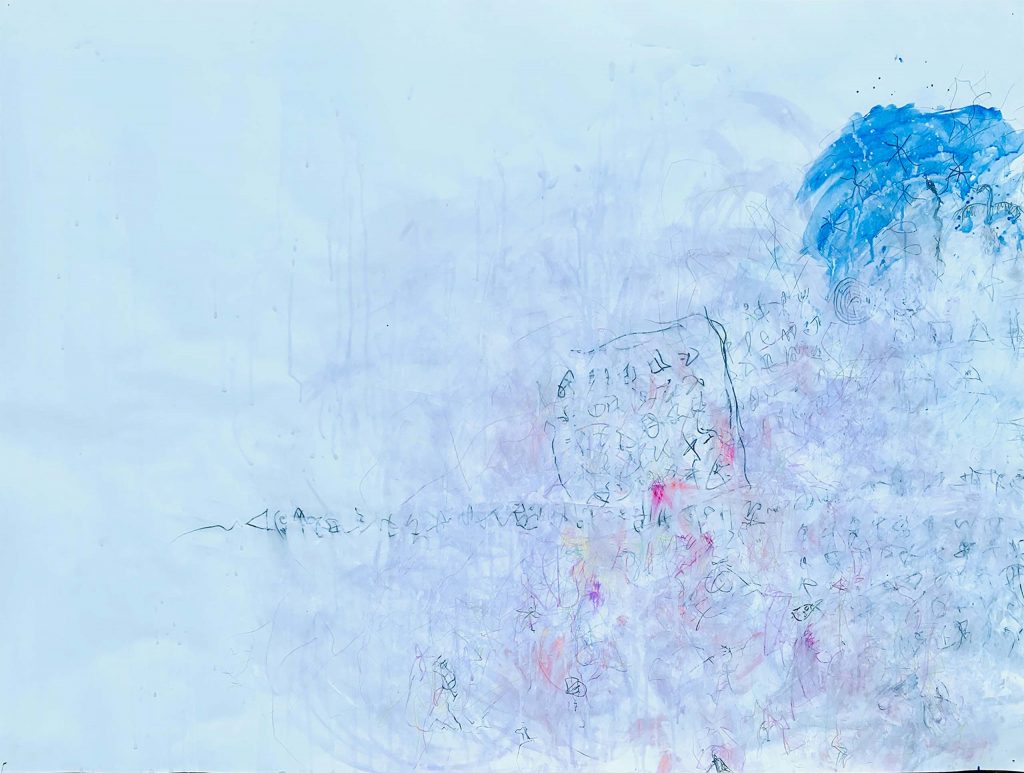 Alphabet is a sub-series of the Koan Series, emphasizing that Intuition and facilitation of awakening of consciousness are foundational elements.  There are three equally important inspirations for this series: 1) Written human communication began with mark making that evolved into cuneiform and hieroglyphs.  Scrawling, scribbling, mark making, symbol making are fundamental elements that humans developed to communicate with one another and are essential elements used throughout this series.  2) The earliest alphabet is Proto-Canaanite and the “letters/symbols” used inform this series.  3) The Turkish television series entitled, “The Gift” is influential to this series.  The written word is essential to human communication and interaction.  There is no way we would understand one another without it.  It transcends ethnicity, gender, identity and age.

This symbol equates to our letter “A” 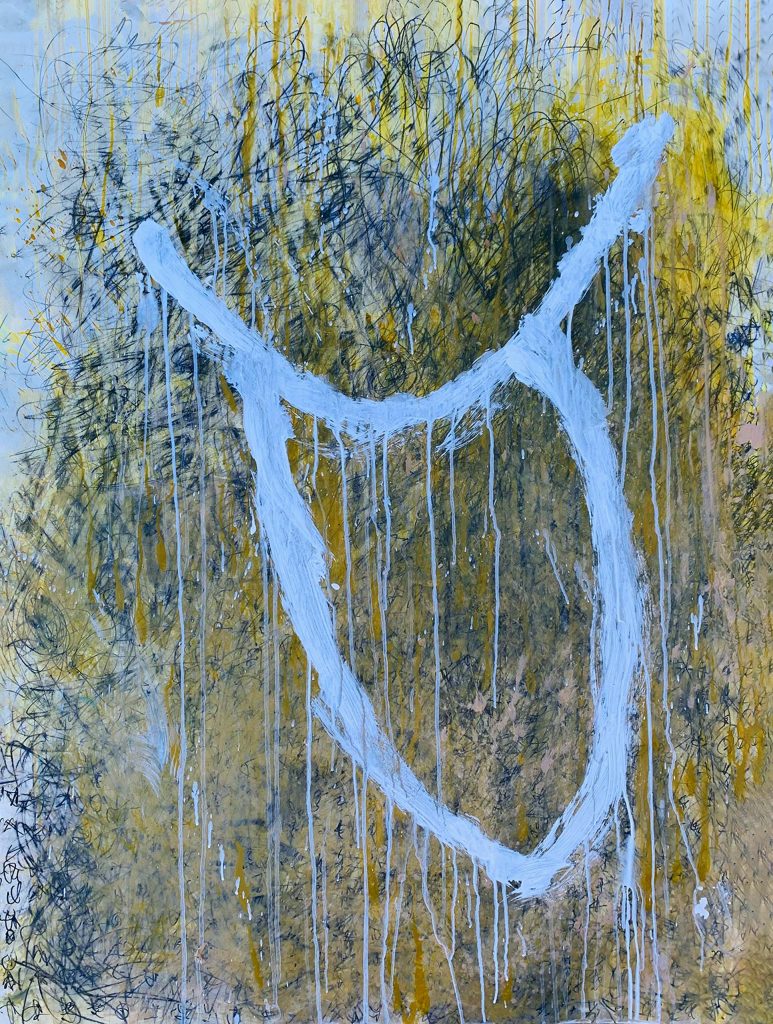 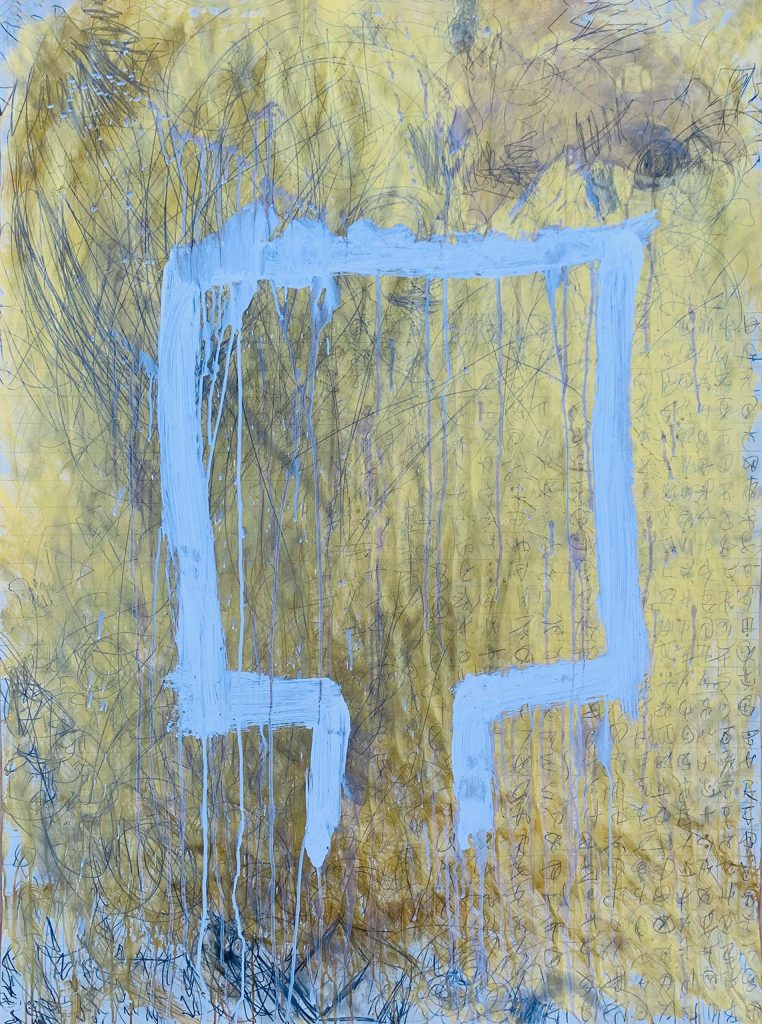 This symbol equates to our letter “B”.  Alchemy is subtly referred to in this work with the gold paint and lead pencil marks and lettering.

This symbol equates to our letter “L” 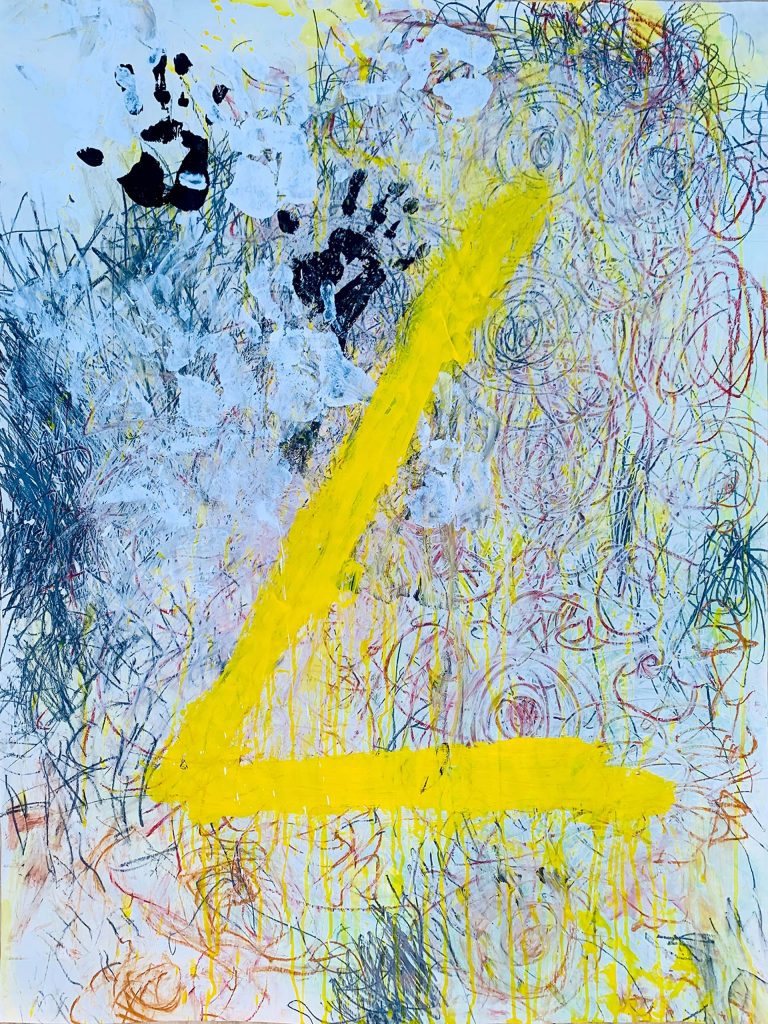 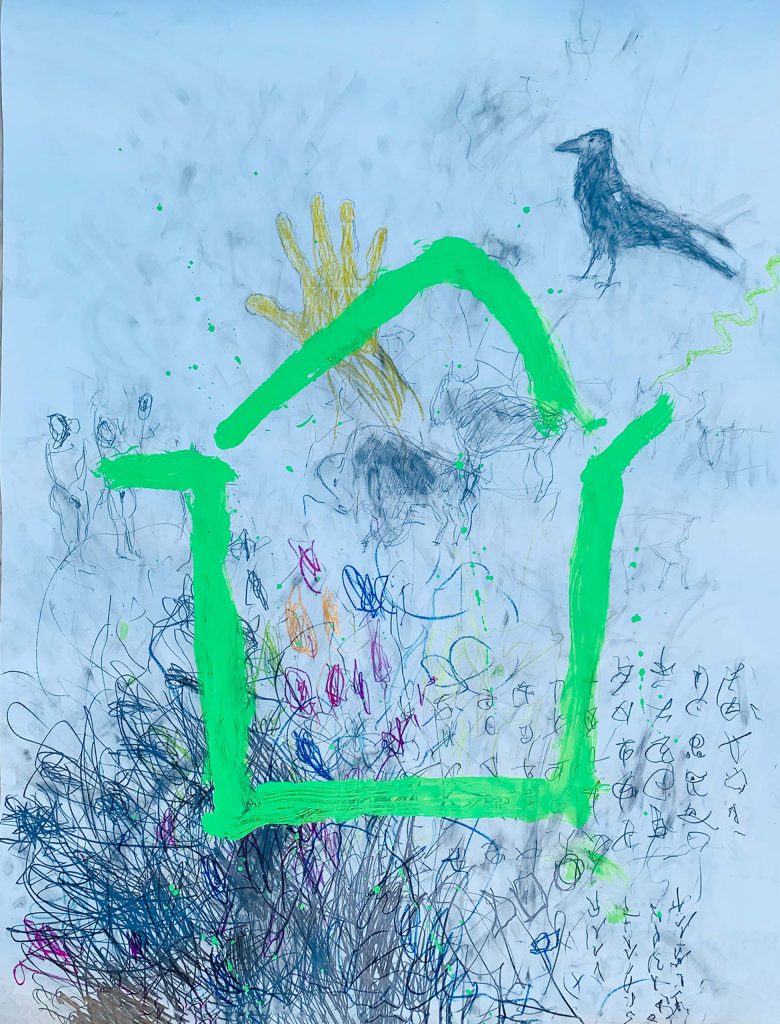 This symbol equates to our letter “D”

This symbol equates to our letter “E” (H).  The gold and lead colored paints provide a subtle reference to alchemy.  In Turkey there is an ancient archeological site known as Karahan Tepe.  The walls of one of the chambers is covered in red pigment.  Speculation is that blood rituals may have been performed there.  The red splotch on this work alludes to that site/chamber. 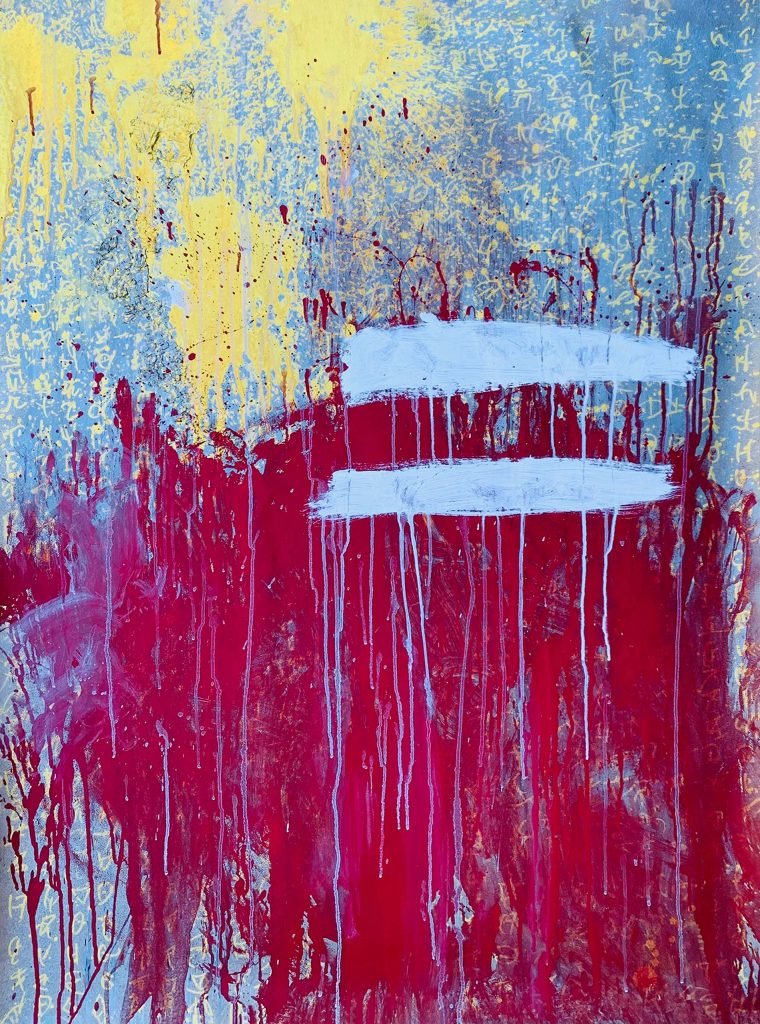 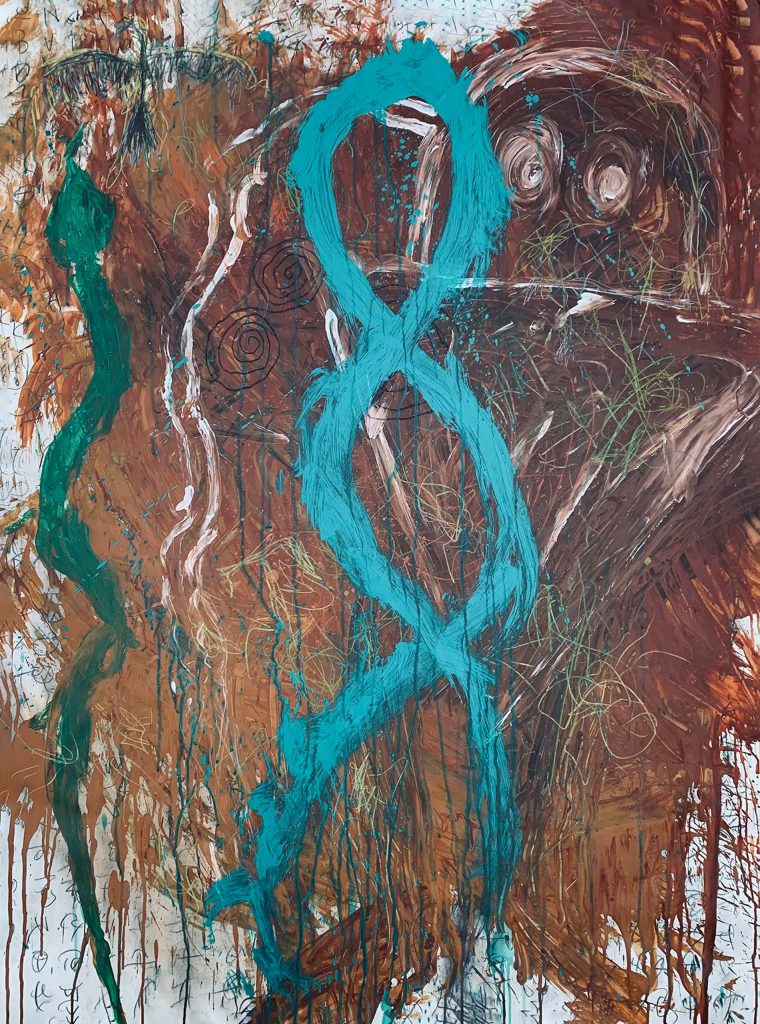 This symbol equates to our letter “Z”. 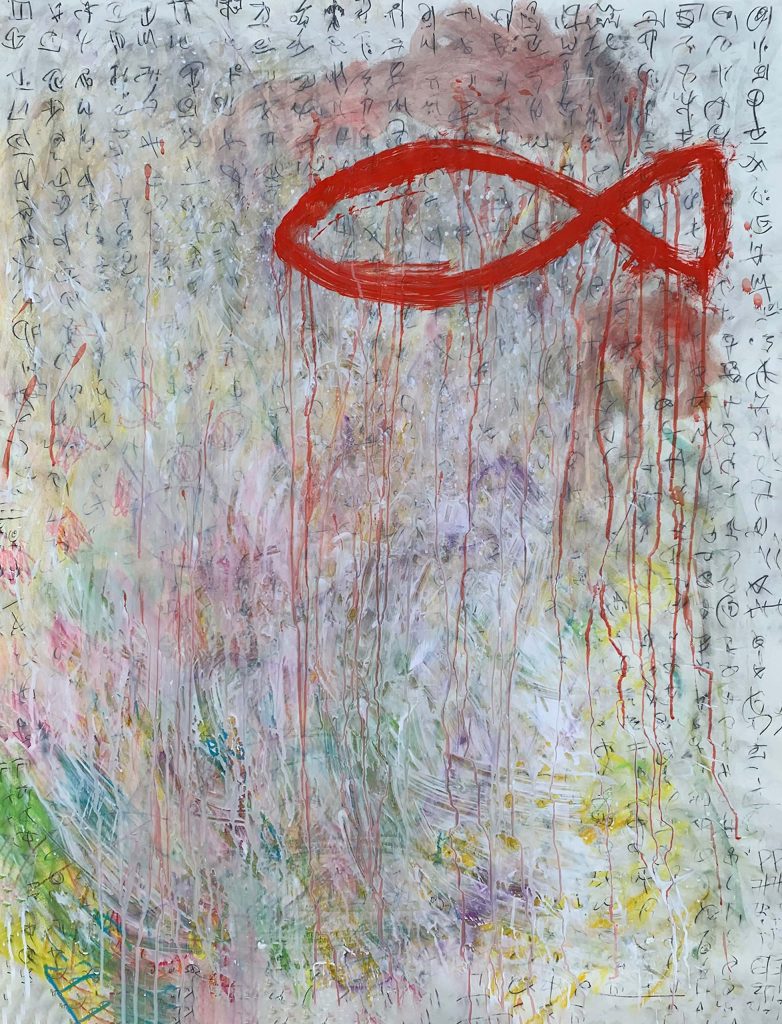 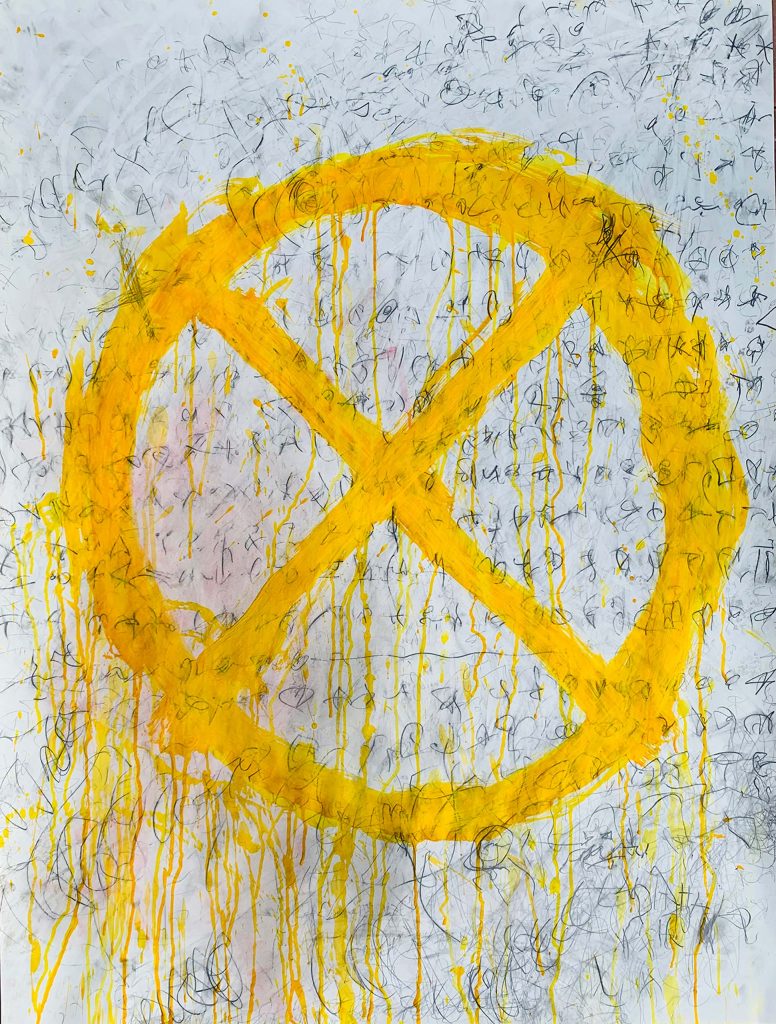 This symbol equates to our letter “T” (a hard “t” sound) 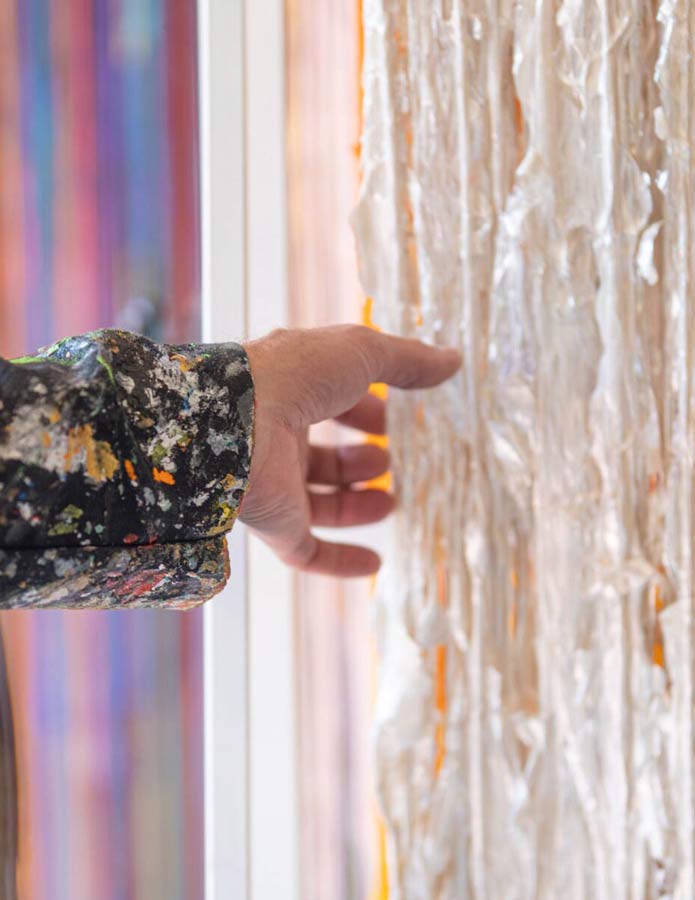 New paintings are always in the works. Stay up to date on my newest releases.